It’s sparkish! It’s bouncing! It’s among the “World’s 50 Best Restaurant” on place 23! It conserves the feeling of New Russia although those times are over! It’s most modern “Russian” cuisine based on a concept you could call “Back To Future”! It’s unfriendly.

Is it even worth to go there? Yes, please, do so even it is (of course) not the 23rd best restaurant of the world! As I am not a professional tester and I not sponsored by San Pelegrino (http://www.theworlds50best.com/) I have the possibility to quote truthful but corybantic subjective. And in particular for this restaurant! 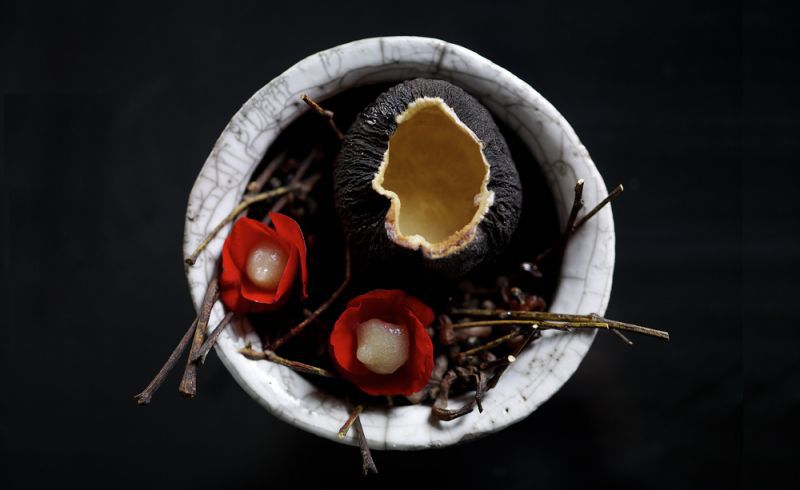 “White Rabbit’s” location is fantastic: on the roof of a shopping mall close to the minister of foreign affairs at the Garden Ring (3 Smolenskaya square, 16th floor) with a great view over Moscow. But if you are not a local you may not find the entry because you stray through all different corners of the mall. Why the fuck aren’t there some signs?

Food is extremely interesting, fascinating and ambitious. The wine list is in comparison with other restaurants in Moscow very good and offers also some rare sort. The service is a catastrophe: arrogant, unfriendly and bigheaded!

The design is really a question of taste as there is a clear and even impressive concept. Nice assembled seating groups, large sofas – out of which it’s rather ambitious to eat a soup -, fresh and trendy colors.

Concept of chef Vladimir Mukhin is a modern interpretation of Russian cuisine (with some international flavors of course). This doesn’t mean a copy of existing classic dishes, it is rather audacious anticipations. Regionalism is one of the most important trends of cooking nowadays. It isn’t a surprise that this trends reached Moscow but it is an astonishment upon to which extend some genius creating unique dishes with some traditional and regional flavors and ingredients. My Russian friend Alexey Lazarenko even plunged into children memories because of the first smells of some of the courses: Odor and aroma which let him think about wet grass or marsh, summer flowers and birch grove. Light flavors of pickled mushrooms – a very typical Russian side dish – remember going on a mushroom foray late summer, the scent of heavier honey let you think of resinous bark. Really wonderful, even a little bit mystical.

If you look at White Rabbit’s webpage you can find the actual tasting set which we enjoyed. Since I broke my smartphone recently I lost all my own photos. The visual presentation at the webpage is much nicer anyhow and (honestly) truthful.

I doubt very much that there are too many guests who really appreciate this art of cooking: a creation of the fascination of “Russian” flavors. Although each little portion was so nice prepared and arranged, may be not all of them were taste wise outstanding, but all of them really exciting. The audience around us seemed to be rather dull and probably more effected by the way how food is served. (Or just by the fact that there were at “the” White Rabbit). While the waiter handed out plates he explained us what we got. In Russian and regrettably not even a short version in English. Alternatively you can follow the menu which offers a short description of each dish.

Although I am not speaking Russian, the way how waiter recite the menu is irreproducible if not even an affront against the impressive skills of the chef. It was so blasé! The opposite actually to the annoying speed in which all courses were delivered. We weren’t even finishing with our plate while the next dish flied to our table. Like we would have had the plan to eat eight or even more courses within an hour lunch time. At the end it was lot food with so many different flavors that I would have needed more and in particular longer brakes in-between. But we were fed like we would have to leave the restaurant within next fifteen minutes. Really uncomfortable!

My summary: a brilliant and very inspired chef celebrates unique cuisine in a really special location. Unfortunately some pleasure is spoiled by the service, parts of the audience and the atmosphere of the restaurant.  If the place would not have such negative side, I would give more points.